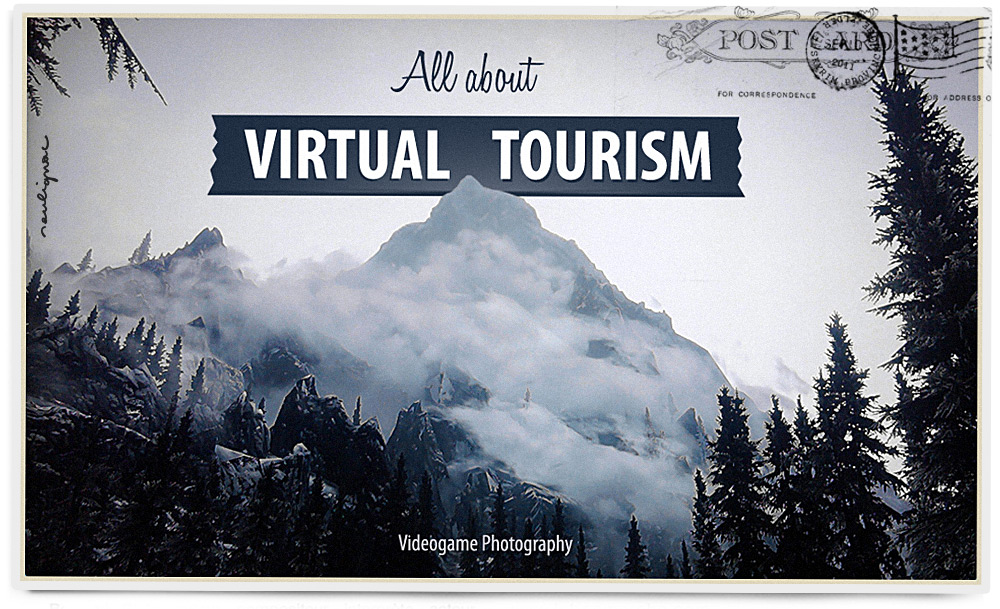 “Virtual Tourism” is a series of photographs based on the contemplative practice of gaming – also known as In-game photography. With a camera at my disposal I simply walk into the decor of video games which offer open worlds, I explicitly do this without paying attention to the context (off mission). I wander around these wide digital open spaces, solely to appreciate the work produced by graphic designers and developers. I then start searching for the best spot where I can take a picture with the most suitable view, location, frame and ideal moment. These pictures, which are exclusively focused on landscapes, are a way to keep memory of my virtual excursions in the Metaverse. They also often reveal empty or “abandoned” areas of the gameplay, places which are usually ignored or neglected by active gamers.

I prefer to take photographs instead of screenshots. This method sublimates the image and makes the texture of the screen visible – a way to witness the broadcast material of our time before the disruption of the virtual reality helmets. The aim is to produce the final piece while taking the picture. The initial photos are originally taken in high definition, and are eventually reduced to a smaller size before being posted online. The pictures online are either left in their original state or moderately altered: a little cropping and editing (brightness, saturation of colors).

This method of shooting has two advantages: when in front of the screen, the moment the picture is taken, the camera reinterprets the pixels. This creates a “smoothing” effect on the surface which eradicates the sometimes too brutal aspect of some decors due to the work of current 3D engines. Finally, when the images are cropped, the visibility of polygons is naturally reduced. The finishing result allows to acquire a “new” image, one which is embellished and beautified yet, one which none the less remains loyal to the original game.

“Environment is important, games are very geographical – they present space almost better than they present time, and we try to use that, to showcase variety between different landscapes. It’s this idea of a digital holiday: being able to explore spaces that don’t really exist is one of the things that’s fascinating about open world games. It’s not just about doing the activities we’ve set, there’s also a sense of being there.” Dan Houser, Rockstar Games (source)

My first aesthetic shock. After a classic period of video game wonderment during my childhood and a first 3D electroshock on Unreal, I was finally discovering a new type of video-game, inspired by an immersive scenario and HD 3D graphics. The willingness of taking screenshots was immediate. I took a little bit of everything : place, objects, interactions, scripted sequences. A basic shooting method, a rendering a bit raw, but the big picture of Virtual Tourism was born : I found a simple method to keep memory of my virtual experiences. See the album Virtual Tourism in New-Mexico.

A game full of pyrotechnics details, using the entire potential of ragdoll physic system. As a fan of John Woo action movies since my childhood, I’m fascinated to be able to play and replay this kind of action scene. A few time before the Let’s Play videos on YouTube, I was capturing with digital camcorder the sequences of gunfights; reporting on the rendering of lights and objects in contact with bullet impacts. Jubilant. I never shared those images on the Internet but the videos must still be on the camcorder’s tapes, somewhere in my parent’s home.

Second shock. My first experience in an open world RPG. First real contemplative gaming experience. Wide landscapes, variable atmospheric effects. A so beautiful universe – perfect mix between art and technology, I had to take the landscapes in pictures, but it was impossible to take a screenshot here (on Xbox 360), so I took pictures with an actual digital camera. The shooting method was transforming the picture surface, with a peculiar and paradoxical effect : the game looked more realistic, the trip memory much more “real”. See the album Virtual Tourism in Washington.

In September 2011, I discovered a press article from the French journalist Erwan Cario, about Iain Andrews‘s work. Before that, the concept of video games photography was not clear in my mind, and publishing my own video games pictures was not a goal. I was just shooting pictures, saving them somewhere on my hard disk, like any other archives, that was enough to keep memories of my virtual trip. To be honest, it was even an occupation a bit “bizarre”, maybe too geeky and hard to explain. Anyway, an art critic had been changing my vision, outside the box, simplified. I was publishing already some pictures taken during my real travel about architecture, design, location scouting; from now, within the same spirit, I could publish pictures from my virtual travel. See all albums from Virtual Tourism.

My first published album was the virtual tour in the amazing Skyrim, certainly the bigger offline open-world game and the hugest interactive scenario I never played at this time. See the album Virtual Tourism in Province of Skyrim.

In 2016, thanks to Just Cause 3, I rediscover the pleasure of contemplating simulation engines. I then make a short video with the physics engine developed by Avalanche Studios. Watch the video Virtual Tourism in Medici Archipelago.

The games released at the end of this decade have been numerous and varied in universes to explore. Most of open-world games now offer an integrated photography mode, meeting the needs of fans of the new popular art that has become video game photography – also called In-game photography.

After being out of virtual worlds for a long time – being then well busy in my real life, I finally came back to the limbos for a proper urban exploration in the Boston of Fallout 4; then after in Wasteland’s desert of Mad Max, the San Francisco of Watch Dog 2, the city of Columbia in Bioshock Infinite and in the Middle Ages of The Witcher 3. I also lost myself in the Ancient Egypt of Assassin’s Creed Origins and its visionary “Discovery Tour”; Ubisoft’s major contribution to the creation of original virtual experiences and the development of new methods of knowledge acquisition.

My approach is neither utilitarian nor journalistic. It is purely artistry. In a video game, I keep my real photographic habits. I live my journey without being riveted behind my lens. Sometimes I don’t even have the time – or the desire – to take photographs. For instance, in the masterpieces developed by Rockstar Games (GTA 4 and Red Dead Redemption 1), I simply didn’t have the “photo reflex”, too absorbed by the universe and the scenario.

Exploration with no constraints

Also, some programs do not lend themselves well to the exercise: games in the third person or certain graphic universes do not allow me to obtain satisfactory results. My priority is to enjoy the game, to contemplate its programmed universe and to take a few pictures. My goal is not to build an useful guide, with practical map, good plan and reviews. If you are interested by this way to play – and to write – you must read the articles of the French journalist Olivier Seguret, named Tourisme virtuel (in French).

The title of the series “Virtual Tourism” refers to my way of playing. I’m not a scoring enthusiast, I consider video games as a rich cultural product, whose sole purpose is not to entertain. I love to play games, of course, but my pleasure is doubled when a deep scenario unfolds and the possibility of getting out of it is offered. Then I like to get lost in the map, test the limits of the program, reach hard-to-reach areas, be surprised by an event, dream, fiction, imagine the designers’ development techniques… In short, I’m a bit like those tourists who visit a country without any planning. Once in the program, I embark on a deep, creative, limitless – or almost limitless – exploration armed with my imagination and a camera.

The titles of Virtual Tourism posts do not have the name of the game but the names of the places where the story of the game takes place. This little detail of nomenclature had an unexpected effect on search engines: Google’s algorithms did not differentiate between real and virtual places, so my photographs quickly cohabited with the screenshot of real virtual tour software. Perhaps more interesting is Journey’s intrusion when an Internet user searches for photographs of unknown desert.

Today, as an aesthete-gamer passionate by emergent gameplay, I’m mainly focused on openworld-sandbox games. Firstly because they are the cutting edge of technological and storytelling innovation in video game industry; but also because they simply fit my needs: time and space are open, the ideal conditions for a contemplative video games photographer. 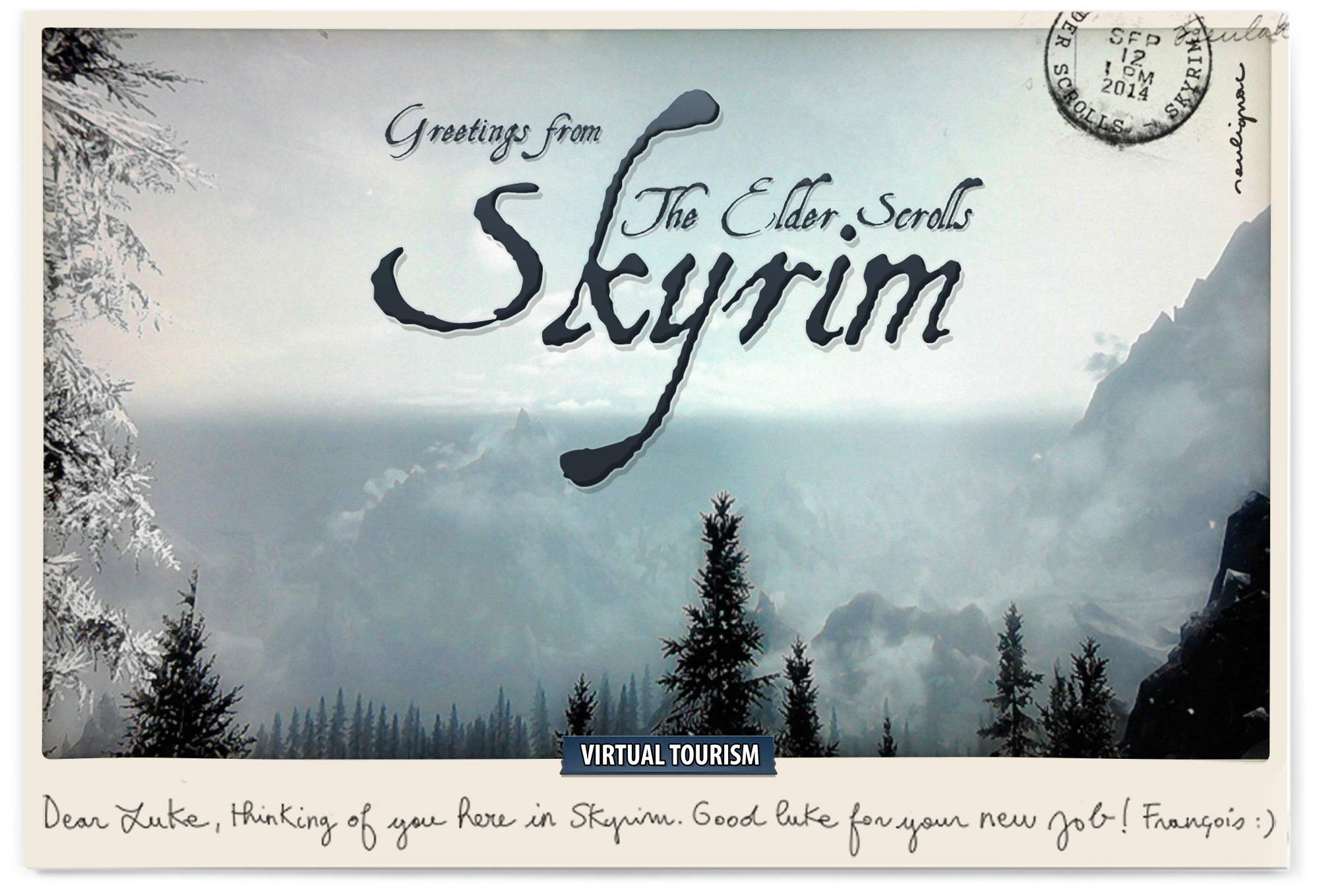 I take in-game pictures to keep tangible memories of my virtual experiences. During these trips, I sometimes send postcards to share my memories and connect with people. Read more.

Back on top
François Soulignac